?
In 2020, the?Mid-Autumn Festival will fall on October 1st (Thursday). It is the same day as China National Day. Domestic China trips are allowed in China (except for areas with medium or high risk). For more latest travel information such as where you can travel and what you will need, please see:?China Travel Restrictions: China Expat Travel and Entry Policy

The Mid-Autumn Festival is celebrated in many East Asian communities. In China, it's a reunion time for families, just like Thanksgiving, while in Vietnam, it's more like a children's day.

The Mid-Autumn Festival is also called the Moon Festival or the Mooncake Festival. It traditionally falls on the 15th?day of the eighth month in the Chinese lunar calendar, which is in September or early October in the Gregorian calendar.

The Mid-Autumn Festival is the second most important festival in China after?Chinese New Year. Chinese people celebrate it by gathering for dinners and lighting paper lanterns. 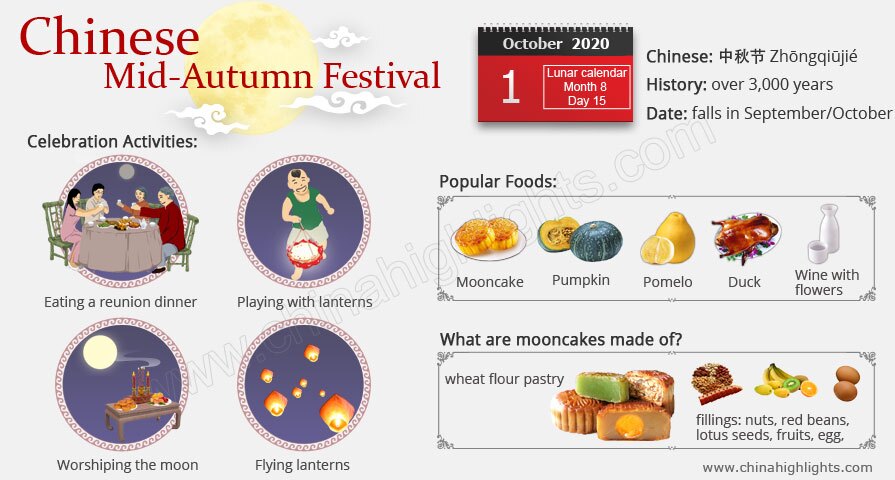 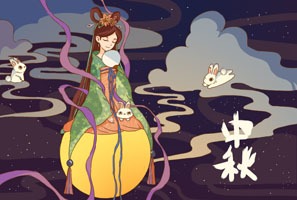 Send Below Greeting eCards to Your Friends with a Single Click How the Chinese Celebrate Mid-Autumn Festival

The common customs of the Mid-Autumn Festival include family members eating dinner together, just like a Thanksgiving dinner, sharing mooncakes, worshiping the moon with gifts, displaying lanterns, and regional activities.

In Hong Kong, a unique annual fire dragon show is held in the Tai Hang neighborhood during the Mid-Autumn Festival.

Chinese people increasingly love to travel during their holidays to escape from the busy days. See the ?9 Best Places to Celebrate the Mid-Autumn Festival to get inspiration for your vacation.

Alternatively, book in advance and let somebody in the know, like?China Highlights, help you to?create your trip?so that you avoid the crowds.

How the Mid-Autumn Festival Is Celebrated in Asian Countries 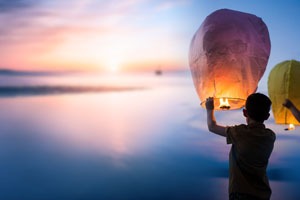 In many East Asian communities, the Mid-Autumn Festival is widely celebrated. Many interesting activities with unique local features are held.

In Singapore, Malaysia, and the Philippines – three countries with many ethnic Chinese citizens – the celebrations are more Chinese, such as lighting lanterns and dragon dances.

In other countries, such as Japan, South Korea, and Vietnam, which have also been influenced deeply by Chinese culture, new celebrations have been derived from their unique cultures. Read about them below:

Why the Moon Festival Is Celebrated

When the Moon Festival Become a Festival

The Mid-Autumn Festival has a history of over 3,000 years. It was derived from the custom of moon worshiping during the Shang Dynasty (c.1600–1046 BC). After that, it was first celebrated as a national festival during the Northern Song Dynasty (960–1127).

People have long believed that worshiping the moon and eating together around a round table will bring them good luck and happiness.

The Top 5 Cities in China for Mid-Autumn Festivities 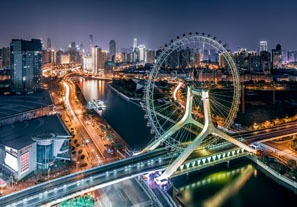 People in different cities have different customs and preferred places to enjoy this public holiday in September. Click the links to discover how the Mid-Autumn Festival is celebrated in these major China cities:

What the Chinese Eat for Mid-Autumn Festival 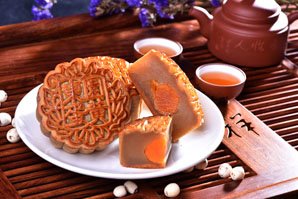 Mooncakes?are the must-eat Mid-Autumn food in China. They are a traditional Chinese pastry. Chinese people see in the roundness of mooncakes a symbol of reunion and happiness.

Other foods eaten during the festival are harvest foods, such as crabs, pumpkins, pomeloes, and grapes. People enjoy them at their freshest, most nutritious, and auspicious meanings are particularly associated with round foods.

Festival food traditions are also changing. The younger generation have their own ideas about what should be eaten. Most of them don't like mooncakes, and prefer to eat what they like.